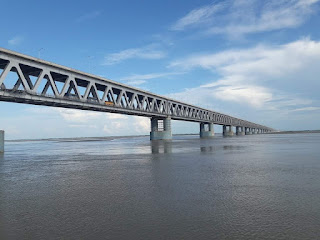 On the occasion of  birth anniversary of Prime Minister Atal Bihari Vajpayee, Prime Minister Narendra Modi gave the countrymen to the Boggi Bridge. Modi inaugurated the country's longest and Asia's largest rail-road bridge in Dibrugarh in Assam. Built on the northern and southern shores of the Brahmaputra river, this bridge connects the district of Assam to Dibrugarh. PM Modi addressed the people present there after the inauguration of this bridge.
Modi started his speech by giving greetings to all the nationals including the Assam, including the good wishes of Christmas. Modi said that today's day is historic. Congratulations to all of you, the longest railway-road bridge in the country. This bridge is not just a bridge but lifeline for people of Assam and Arunachal. Due to this bridge the distance between Itanagar and Dibrugarh has been less than 200 km.This pace of development is going to change Assam's entire North-East picture. After independence, in Brahmaputra, there were three bridges in 70 years and in the last four years, we have made three bridges over Brahmaputra, while work on new bridges is also underway.

Attacking the Congress, he said that all the schemes started by the Atal government were suspended. When the Atal government came in 2004, many of his projects were stopped. If the government of Atal ji again got the opportunity, then the bridge would be inaugurated by 2007-2008. The Congress government did not pay attention to your needs. After the formation of government in 2014, we removed all obstacles of this project and speeded up its work.Completed his dream on the birthday of Atal ji and paid tribute to him. Wherever Atalji will be today, you will be getting very cheerful seeing the joy of the face when people begin the Bogibeel Bridge.

24 lakh free gas connections to poor sisters of Assam
Under the Ujjwala scheme, connections of about 24 lakh free gas have been given to Assam poor sisters. The result is that in Assam till about four and a half years ago, about 40 percent of the households had gas cylinders, while today the scope has doubled, almost 80 percent. At the same time, under the good luck scheme, more than 12 lakh families of Assam have been given free electricity connections in the past year. By which, the scope of power generation in Assam has increased from about 50 percent to about 90 percent.

2. The bridge has a two line track for train’s in lower deck and has a 3 lane road on the upper deck.Indian railway has got this type of rail road track for itself for the first time.

3. This bridge is build by Hindustan construction company.

4. PM has told that Rail road bridge  estimated cost is around 6,000 crores.

5. This bridge will reduce the distance for people of the North east by around 200 Km.

6. Also the time taken to reach from Assam to Arunachal Pradesh will be reduced around 5 to 6 hours.

8. This corridor will also help our army to reach quickly to Arunachal Pradesh and also reduce the cost of each and every products which was taking lots of time earlier.