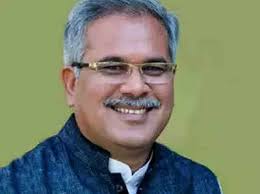 After winning the election  a huge majority in Chhattisgarh on December 11, Congress had  announced the name of its CM. Supervisors from Delhi to Raipur, Mallikarjun Kharge and PL Punia announced this in the meeting of the legislature party. The envelope provided by Rahul Gandhi was opened in the meeting of the Legislative Party which included Baghel's name. Monday at 5 pm, swearing-in ceremony of Bhupesh Baghel will be held. Just take the oath now CM. The Cabinet will be formed later.

Following points were stated by Chhattisgarh bagel :-
As soon as the CM was elected, Bhupesh Baghel said, the investigation of the Ziram case was first priority, the second debt waiver.

Senior leader of congress has stated :-

After this, talked to senior leaders of Chhattisgarh. It was difficult to decide. Everyone has worked for the party. Where all are equal, there is such difficulty. Everyone worked very hard. After talking to all, the final decision was told to us. Today, Rahulji's decision was announced in the meeting of the legislative party and in this way Bhupesh Baghel has been elected the leader of the legislature party. All the legislators have supported it.

When we came here two days ago, all the legislators had decided in one voice that the leader whom Rahul Gandhiji would choose, he would be our CM. Rahul asked all the MLAs to speak, which was summarized before the Congress president. That was discussed.

1.He is the first CM of chattisgarh who has been nominated for the post after winning the election.As we compare other two CM Mr. Ajit jogi (Congress ) and Mr. Raman singh (BJP).Their names were in the news for CM before the election.

2.When the land of tribals changed the law, Bhupesh created a big movement and the government had to withdraw the law of amendment to the Land Revenue Code.

4.After becoming Bhupesh Baghel's party chief, there were many such agitations which returned the confidence of the workers and united the party.

Mr baghel will take the oath on 17th december as the CM of chattisgarh.