Election result of 5 states in india 2018 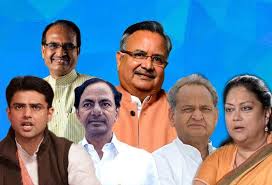 Counting of the five states has shown that people's power can make and break anything. All eyes were on the results of Madhya Pradesh. It was clear by the evening that in which state, whose government is going to be formed. However,  the Congress has made an edge in the three states of Madhya Pradesh, Chhattisgarh and Rajasthan. There was  a strong fight with the BJP in Madhya Pradesh. At the same time, MNF has achieved a clear majority in Mizoram. TRS again has moved  towards forming a government in Telangana.
Let us state that currently the government of Bharatiya Janata Party in Madhya Pradesh, Chhattisgarh and Rajasthan. At the same time, the Telangana Rashtra Samiti in Telangana and the Congress government in Mizoram. These election results of five states were also
considered to be a semi-final of the 2019 general elections.

Caretaker CM K. in Telangana Chandrasekhar Rao has won easily over his seat. He has defeated the opponent by 50 thousand votes from Gajewal seat.

A look at the statistics: