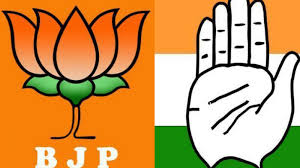 The Election Commission of CG has come to the polls in 90 assembly constituencies in Chhattisgarh. BJP's Raman Singh has been the Chief Minister of the state for the past 15 years. The main fight here is between the Congress and the BJP.

The election officer said that in this election, about one percent less voting has been done than the last time. During the assembly elections held in 2013, 77.40 percent voters used their franchise.

The official said that all the polling parties have reached Sukhuval. Election materials have been deposited by all in their collection centers. Machines used in the voting have been sealed in the presence of political parties and contesting candidates in the Strong Room. Security forces have been deployed in the protection of the strong room.Police have arrested three youths in connection with the entry of laptops in the Strong Room premises in Naxal-affected Bastar district of Chhattisgarh. Two security personnel were suspended there.

Police officials of Bastar district said on Friday that the police arrested Umatapati Tiwari, Vijay Murkum and another youth in connection with taking laptops in a strong room complex built at Lady Polytechnic College, Dharampura, district headquarter of Jagdalpur.