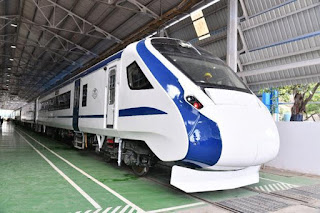 Train-18 reached Agra Cantt station at 2:18 pm after departing from Delhi's Safdarjung station. In this way, the final trial is being told to be successful. During this time, the speed of train-18 was 180 km per hour. Right on the way, unknown people pelted stones on the train, thereby revealing the windows' glaze breakdown.
GM of the Integral Coach Factory tweeted At the same time, Train-18 has loaded 180 kilometers per hour. According to official railway information, the maximum speed of the train is 181 km per hour.
Railway worried about stone pelting :
At the same time, during the final trial, the train has expressed concern with the railway administration about the stone pelting on 18. According to official information, the maximum speed during the trial is 181 km per hour.
At the same time it was said that train 18 will run at a maximum speed of 200 km. The train left from Safdarjung railway station on Thursday 12.15 pm on Thursday. After reaching Palwal at 1 a.m., Agra Cantt reached at 2.18 pm. In return, Agra will leave Cantt at 3.10 pm and reach Safdarjung railway station at 5.05 pm.
Explain that train 18 was built by ICF Chennai at a cost of 100 crores, which recently became India's fastest train. During the experimental trial on a section of Delhi-Rajdhani Marg, its speed was more than 180 km per hour.

There will be two special coaches in this train, 52-52 seats and remaining coaches will have 78-78 seats. Railway Minister Piyush Goyal, who was impressed with the success of 'Train 18' during the trial, has asked the ICF to make four more such trains in the current financial year.
Train 18 will provide WiFi for travelers, GPS based information system (through this will talk to passenger driver), modular bio-vacuum toilet, LED lighting, mobile charging point and temperature control system. There will be two executive coaches in Train-18. They will have 52 seats. While the rest of the coaches will have 78 seats.
Obviously no other trains can compete with the bullet train speed. But, the train will prove to be a major hurdle in the fast-moving trains. This train is the semi-highspeed train. However, it will be much faster than the current fast moving capital and centenary trains. In order to facilitate the passengers, there is a large rack in it, allowing passengers to have as much luggage as possible.

Train-18 trains have 16 coaches. Each four coaches are in one set. Due to the train set, there are engines on both sides of this train. The engines are also in small parts like Metro. In this case, there is a place for 44 passengers to sit in the remaining part of the engine. In this way more passengers will be able to travel.