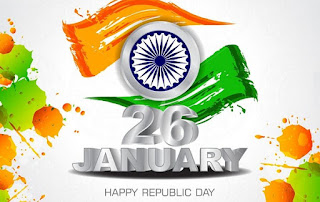 On Saturday India Celeberated its 70th Republic day showing its diversity with rich culuture of different states and also showing the diversity of Indian diaspora.Around 1.5 lakhs people were gathered at Rajpath in the chilling morning.The theme of this Republic day was based on Mahatma gandhi’s 150th Birth Anniversay,many factes were loomed in the parade from his life.

The president of South Africa Mr Cyril Ramaphosa was the Chief guest of the Republic day,he was present there to see the diveristy of indian cultural and Indian Miltiary mights.
The Ashok chakra was awarded to Lance naik Nazir Ahmed Wani,he was awarded the same posthumously ,his wife and mother collected the same.At this time moist were in the eyes of our nation for the brave soldiers who had died for their matryland.

This time history was created by Indian Army,Indian Navy,Indian Air force because all their contingents were lead by the Woman officer for the first time after independance.Lieutenant Bhavana kasturi leading the Indian Army corps,Lt commander Ambika Sudhakaran was the head of the of Indian Navy contingent and Flying officer Ragi Ramachandran lead the Indian army squad.Also Major Khushboo Kanwar lead the contingent of the woman’s assam rifles unit.Major Khushboo kanwar is the duaghter of a bus conductor in rajasthan,according to her its a great honour for her and a pride moment in her life.

Also for the first time Captain Shikha surbhi performs a bike stunt and Assam rifles contingent used the Bio fuel  AN-32 Sutlej Aircraft which were participating.The four veterans of INA had taken the part in the parade for the first time in history,they all were 90 years old,rode in an open jeep.Among them.

The newly inducted M777 and howitzers and the K9 Vajra self propepolled howitzers, all to raucous cheers from the crowd.There was a good weather on Saturday from the last 2 years peoples were missing this pleasure,MI-17 Choppers were raining the flowers on the people at Rajpath.Also 37 aircrafts were shown the of Indian air force.On Saturday the Indian Air force pilot had ample visibility to underytake the flypast.

The drones and cameras were keeping surveillance of the 1.5 lakhs people under Delhi police special cell,National security gaurd,special protection group and the Army cops.several roads entry were banned and vechiles without parking stickers were turned away back before they reached lutuyens zone.

Likewise every time various  jhankies of different states showing their different cultures were seen.
Among those were childrens and NCC cadets who have got cheers and accolades from the audience present at Rajpath.3 schools were from delhi and 1 from kolkota brightened up the stage with their breathtaking performances, they all sends a unique messgae from their performsnce to the society.26 children were awarded the pradhan mantri bal prushkar.

After the event complition PM Modi as usual,strode along the Rajpath forgreetings the children and various youngsters which were present at the rajpath behind the barricades and waved his hands to others.