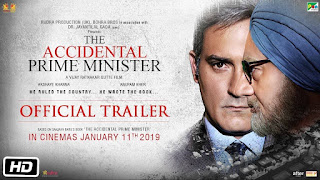 Actor Anupam Kher and Akshay Khanna starrer The Accidental Prime Minister, the political corridors have stirred up and the Congress party has demanded to watch the film before release. Director of the film, Vijay Gutt, clearly stated in a special interview that he would not show anyone other than Manmohan Singh and Sanjay Baru before his film release.

Vijay Gutte says, "So far, the film has neither seen by Prime Minister Manmohan Singh nor Sanjay Baru, but we will present Sanjay Baru in the film today and tomorrow. The Sanjay Baru trailer was about to watch the film on the day of launch, but that day did not happen. '

Replying to Vijay, Vijay said, "I do not have to answer this question, I have answered it several times before. We are open to Manmohan Singhji just by our side, we will show him the film, we have made a film on his book written on him.

People of Youth Congress also want to watch the film before release, will show them?
Vijay says, "Now, I will show the film to whom, thousands of people will come." I can not show to everyone Everything takes money and time, neither is it the time for so many people to show the film nor do I have so much money. I'm very busy, I do not have the time. I will only take time out for Manmohan Singhji and show them the film. '


Are you scared of the controversy over the film?In reply, Vijay says, 'Of course, ask what you have to ask, we have made a movie based on a book. I have no fear of any kind. '

Elections are coming, in this way your film is being released, will people change your thinking?