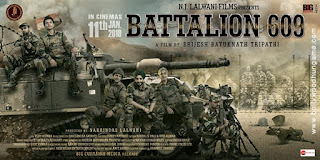 It is a january for the month that the films which are covered in patriotism are very good. It has always been happening, the Independence Day or the Republic Day coming in January, the filmmakers do not want to leave the opportunity to capitalize on patriotic films. With this intention, films like 'Uri', 'Accidental Prime Minister', 'Thakre' and 'Manikarnika' are being released on the Republic Day, which are somewhere in the color of patriotism or politics.

Between these films, writer-director Batuknath Tripathi has come up with 'Battalion 609', which looks like a movie about patriotism, but soon after the start of the story, it is estimated that between
India-Pakistan Attempts to woo the country's love by linking the hostility of cricket with cricket has been tried. This effort has proved to be raw. So far, on the border of India-Pakistan, there have been many films like 'Filmmasta', 'Var Leop Na Naar', and this film also seems to be the same episode.

The story of the film begins with the Indo-Pak border, where both the soldiers of the two countries are undertaking their duty of border security with promptness. Captain Kamraj Mishra (Shoaib Ibrahim) of Battalion 609 of India is very passionate and emotional about the country's love.
In Kamraj's battalion, his friend is also a fighter like Iqbal Qureshi (Faith Kini), Balbir Singh (Jashn Singh Kohli), and on the other hand, Captain Anwar Alam of the Pakistan Army (Vicky Ahuja) is also a brave soldier. After banning the cricket match between India and Pakistan, there is a clash between the soldiers of both the countries and Captain of both the army decides to play cricket matches together. It is decided that the match which will be lost, it will have to give it 18 kilometers from the land of your country.Kamaraj takes this decision in the absence of his seniors and then he faces many challenges along with the Taliban.

Director Brajesh Batuknath Tripathi has created a game of cricket that is considered to be an integral part of the two countries besides bans of Pakistan to awaken patriotism, but due to weak story and a loose screenplay, the film does not reach any conclusions.

The Prime Ministers of both countries seem to be unrestrained to bet the 18-kilometer land on the board of cricket match. In the second half, cricket surges bore much. The film reminds of 'Lagaan'.
Talking about acting, TV actor Shoaib Ibrahim is going to debut this film. He has done justice with his role. In the role of his colleagues in the film, Kishine Kishni, Jashn Singh Kohli and Jassi have done well. Vicky  Ahuja has been cast in the role of Pakistani Captain. Talk about actresses, then Alina Kazan is beautiful, but she and Farnaz Shetty have not got much chance on the screen. The songs of the movie like 'Two Peg PK', 'Kho Rahun Tum Tak Me' are fine.