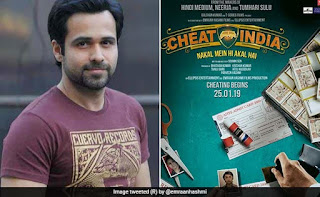 Cheat India was finally released as "Why Cheat India". Imran is working for the first time in a movie that is different from his image. The film has tried to show the story of the education system. Saumik Sen, who directed the film Gulab Gang, has directed this story. Let's know what has happened in the direction of Soumik's film.

This story belongs to Rakesh Sharma aka Rocky of Jhansi. He likes to call himself Rakesh Sharma "Ji". Rakesh is a young man who wants to become a singer, just like the majority of the father's father had to undergo a medical examination. Despite three attempts he found a failure. In the study, he opens the coaching center between the failures and father's tunes, and from here the story begins in the education system in corruption where students get bribe from the students and they are made doctors, engineers and bank managers. This works with the help of Rakesh Exam and the help of top boys. One such topper is Satyendra Sattu (Sinhadip Chatterjee), who makes Rakesh, a fanatic, a fool.
Sattu is trapped in drug addiction. On the other hand, Nupur (Shreya) falls in love with Rakesh. What happens to Sattu, how does Nupur change Rakesh's life, what happens to Rakesh, does he become a good man? To know all these things, see the film.
Talking about the acting of Imran Hashmi, he has largely been seen in the role of a vicious businessman different than the image of the serial kisser. In his career, this character can be considered as a benchmark. Imran impresses with his role and look on the curtain. Shreya also has a good acting role in Nupur's role. Sindi also influences his character. The specialty of the movie is its warp. Fix your place in the script.
"To make the system owl, the owls have to sit in the system," "To pass examinations does not have to be a failure in life" many good communication affects. The direction can be right.

Why to watch this  movies

This  Cheat India is like a treat for the fans of Imran Hashmi. This is a different and very good movie in his films. Well, in spite of this, the spice is not a fight like films. Still the content of the film is engageable and it is worth seeing once. Based on the questions raised,  Cheat India is a successful attempt.