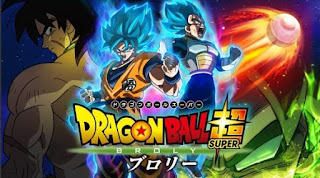 The latest animated movie The “Dragon ball super : Broly “ has earned $ 54M dollar at the box office in
the selected theaters a head of United states priemere.
According to a survey the Funimation had done theie primere at around 1250 theaters and 185 PLF in
the us and Canada.The survey also states that it is the 20 th series of the dragon ball and accumulated
around $55M dollar from 18 offshore country.
The film story revolve around the universe survival saga which describes the varies events in the
tournament of power where different powerfull Dragon ball’s characters battles with themselves for
there fate in the world and with other planets of the universe.In this animated movie the protagonist
Goku and Vegeta are going to encounter with a new saiyan called as Broly.Broly which was appeared in
the Dragon ball Z.The appereance of the broly in the draon ball super is considered as non canonical
and it will feature like a reworked version of the character that is going to be a part of the official
continuity of the series.
Film is also going to tell the history of the saiyan race and how all the 3 charcaters’ orgins will swaddle
with each other with there turbylant history, due to which a massive battle is going to occur between
them.