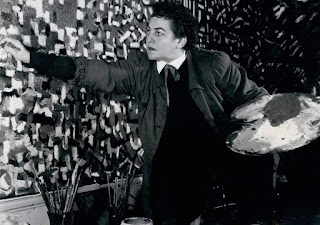 Fahrelnissa Zeid  a name which is basically known for her  influnce of blending Islamic and Byzatine traditions with the west, Google recently played a tribute to her.

The British Art gallery Tate Modern had organised a retrospective and had  called her the best female painter artist of the 20th century.

Ms Fahrelnissa had created her own distinctive style of different patterns which had got accolades worldwide and made her famous as well.Her largest work which was sold at the auctions was "Towards a sky(1953)",Which fetched 1 million pounds in 2017.

According to her she did not want to be an abstract painter, But a flying plane changed her views about the life which she had seen from above while flying which was stated by her in her interview earlier.

She was born in  turkey on 7 january 1901  and was the first woman to go to the art school for learning the techniques of an artist.She had lived in many country of the world and was the part of the avant grade scenes of pre war berlin,Istanbul and paris post war. She was married to prince Zied bin hussian.

She became famous in 1950 when she was travelling between london and paris doing her exhibition continuosuly due to which her reputation becames popular as an artist.
She had portaryed many Pictures of friends and family of different peoples.She had also painted the pictures of Donald trump in 1980s.
In the late days of her life she went to Jordan were she had opened her an art school and died there in 5 september  1991.

The exhibition organised by Tate was basically in the memory of such a great female Artisist so that we shall not forget her.