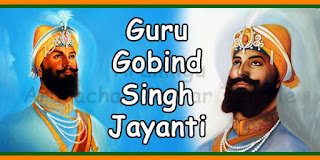 'Give Govind Singh the name of a warrior for one hundred million'. This statement of Guru Gobind Singh, after hundreds of years still gives us the courage to raise voice against tyranny and injustice. On the birth anniversary of Guru Gobind Singh, we are telling you five major gurudwaras of the country and the five stories related to them. Today, Sikhs from all over the world will join here.

Takht Shri Harimandirji is the second big cot of the Sikhs in the world. This is the birthplace of Tenth Guru Govind Singh. King Fatehchand Mani constructed the building here in 1772. Later Maharaja Ranjit Singh built a grand gurudwara in 1837. In 1934, there was damage to the building in Bihar earthquake in 1934. Subsequently, in 1954 Shiromani Gurudwara Management Committee, Amritsar started construction of a five-storey building. Three years later, the construction of the gurdwara on Guruji's Prakashtas was completed.

The history of the struggle of the Mughals and the bravery of Guru Gobind Singh has spread in Anandpur Sahib situated in Punjab, adjacent to Himachal Pradesh border. The heavy army of Mughal ruler Aurangzeb had to blow dust once or twice but not here. In 1700, more than 10 thousand Mughal soldiers had to leave the field before the Sikh warlords. Apart from the Mughals, the hill chiefs who were accompanying him in 1704 also defeated the Hindu rulers. Guru Gobind Singh started the Khalsa cult in 1699 by picking the paws here.

Dmdama Sahib: Here is the gurudwara:

Damdamas Sahib, located in Bhathinda, Punjab, is one of the five major planks. This is the place where Guru Gobind Singh had finalized Sri Guru Granth Sahib in 1705. Guru Gobind Singh gave this place as Kashi name of Guru. Although it is now known as Dumdama Sahib.

Hujoor Sahib: Guru Granth Sahib is the only guru:

Guru Gobind Singh breathed his last in Huzur Sahib, situated on the bank of river Godavari in Nanded, Maharashtra. He was injured while fighting two attackers, and at the age of 41, he said goodbye to the world. They camped here in 1708. When he thought that it was time to go now, he ordered the accompaniment that now Guru Granth Sahib is your Guru. Guru ji kept the forehead in front of five paisa and coconut guru granth sahib. Since then Guru Granth Sahib was considered as a guru.