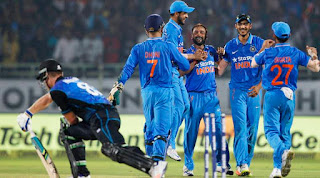 Virat Kohli led Indian team has reached New Zealand after scoring three formats of cricket on Australian soil. India will play limited overs cricket on their New Zealand tour. Firstly, a series of five one-day matches will be held, after which the series of three T20 matches will be played. History has been spectacular between the two teams and has always been exciting and interesting for India's New Zealand tour fans. After defeating Australia in the one-day series 2-1 on the same ground, Team India is going to play ODI series against Kiwi in the first place, let's tell you some interesting statistics related to it.
All eyes will remain on the one-day series between India and New Zealand, as it will be the last challenge of the Indian team on the foreign soil before the World Cup 2019. If India succeeds in defeating the New Zealand team then it will be able to return to India with increased morale. The Indian team has to host the Australian team after returning to India, so before retiring against desperate kangaroos to take revenge, the Indian team will have to maintain their winning streak. Know these important and important figures before the ODI series starting on Wednesday.
India and New Zealand face one-on-one
Total matches- 101
India won - 51 matches
New Zealand won - 44 matches
Tie-1 match
No result - 5 matches