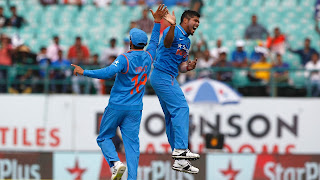 
The 1st ODI of india and New Zealand started in napier,New Zealand won the toss and had started batting, New Zealand made the score of 157 in 34 overs.Theindian team blowers kuldeepjadavshami,chahal and shami had bowled there overs and had taken the wickets 4 and 2 respectively. Shami had been given chance back again in this series.
Shami had started delivery his overs in full swing and helped the team to get there breakthrough in the early overs. Once he has taken the early wickets then New Zealand did not got any chance  to  bounce back.After that both bowlers kuldeepjadav and chahal had done there jobs by taking 4 and 2 wickets respectively.
Shikhardhawan had made his 5000 runs in this match,By scoring half century in the game.
Indian bastmens had shown there good performance and made the target of 157.
As per DL method indian team had won the match .The 1st ODI against New Zealand was won by indian team by 8 wickets in 34 overs.