India's chance to get closer to England in ODI rankings 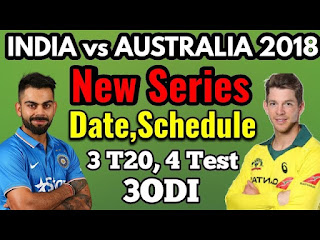 Virat Kohli and fast bowler Jaspreet Bumrah have been on top in the individual rankings for the ICC ODI Rankings but if India wins their next eight one-day matches, then they will be left behind only one point in the first place in the team rankings.

India have to play three more matches from Australia and five ODIs from New Zealand, which will reach 125 points and only one point behind England, but it will only happen if it wins all eight of their matches, while Pakistan will be able to beat them South Africa will be defeated by 5-0.

The England team is leading the table with a score of 126, while the Indian team is currently running second with 121 points. In the batting list, Kohli (First) and Rohit Sharma (Second) have retained their place, while Bumrahah's bowlers are far ahead of Rashid Khan (second) of Afghanistan and his teammate Kuldeep Yadav (Third).

Among other Indians batsmen Shikhar Dhawan is in Ninth place, while leg spinner Yuswendra Chahal is in joint Sixth place with Adil Rashid of England.

In the ODI team rankings, New Zealand retained their third place after defeating Sri Lanka. He achieved a score, he scored 113, while Sri Lanka remained at his eighth position, but he has lost one point, which has 78 points.

India, after losing the fourth and final Test match due to rain and bad weather, defeated Australia 2-1 and won the Test series for the first time on Australian soil here on Monday. In this way Virat Kohli has become the first Indian and first Asian captain to win a series in Australia. With this win, Team India has created a new history after 70 years.

Due to rain, the game of fifth and final day could not be played and the umpires decided to draw a match after lunch after which India made their four-match series 2-1. In this way, India was successful in retaining the Border-Gavaskar Trophy.

India had made an unbeatable 2-1 lead in the series before the fourth Test. The Indian team won the first Test match in Adelaide by 31 runs. Australia returned with a 146-run win in Perth in the second Test match, but India had made strong moves towards creating history by making their name in the third match with 137 runs in Melbourne.

India declared their first innings by 622 runs on 7 wickets, in response to that Australia were dismissed for 300 runs and had to land for their first time in the last 30 years on their follow-on to follow-on. Australia scored 6 runs without any loss in the second innings.

The fifth day was covered with pitch cover throughout the morning session. Black dense clouds are covered above the Sydney Cricket Ground and there is light rain in the meantime. Sunday also remained cloudy all day and situation did not change even today.

The game was to start at 10 am in the local time, but the possibility of the rain ended. The umpires finally decided to draw the match at 2 o'clock 30 minutes at the local time.

The Indian batsmen kept on the first two days of the match. Cheteshwar Pujara scored 193 and Rishabh Pant made an unbeaten 159. Australia, on the third day, scored 236 runs for 6 wickets, due to poor light conditions. Next day his team was out for 300 runs. India's Kuldeep Yadav took 5 wickets for 99 runs.

India invited Australia to follow-on but due to poor light the game of the fourth day had to end soon. Australia then scored 6 runs without any losses.

Pujara played an important role in winning the series in India. He scored 521 runs in the series at an average of 74.42, including three centuries. They were selected Man of the Match and Man of the Series.