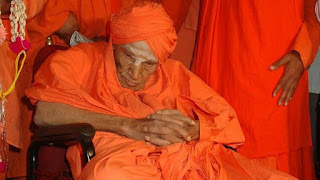 The abbot of Siddaganga Matha of Karnataka died on Monday after a long illness. Chief Minister HD Kumaraswamy informed about this. He told that Mr. Shivakumara Swami ji took the last breath at 11:44. Swamiji of the Lingayat-Vereshshiv community was 111 years old. His funeral will take place on January 22 at 4:30 pm. Meanwhile, the state government announced a three-day state mourning on his death. Please tell that Swamiji was also called a Walking God (living God).
CM Kumaraswamy said, 'State Government is the abbot of Sadhganga MaathWith the announcement of the death of ShivkumarSwamiji, the government announces one-day public holiday in all schools, colleges and government offices. Apart from CM, Karnataka BJP President BS Yeddyurappa, MB Patil, KJ George and Sadanand Gowda were also present in the monastery during this period. Swamiji had an operation on December 8, after which he had a lung infection. Since then, he started to get sick. Their operation was in bil and liverWas done for the infection.
Recently he was put on ventilator and he was battling life and death. His doctor, God, appealed to his followers to be calm. He had told that Swamiji's condition remained serious and he was also talking to other doctors for better treatment.
He was born on April 1, 1907 in Ramnagar district of Virpura village of Karnataka. He was awarded the Padma Bhushan in 2015. He is known for many social functions. His followers considered him an avatar of 12th century social reformer Baswa.