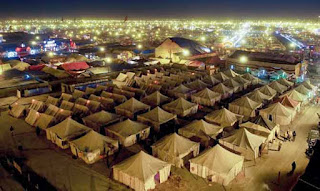 Kumbh Mela The Yogi Sarkar of Uttar Pradesh has made special arrangements for the Kumbh Mela. A 10-kilometer long ghat and changing rooms have been built at Sangam. 1.22 lakh toilets have been constructed under Clean Aquarius hypothesis and 20,000 employees have been deployed for cleanliness. Apart from this, selfie points, food courts and coffee points have been made for pilgrims. Along with the high security arrangements have been made. Read this news to know all the preparations.

Prayagraj has got ready to host Kumbh. The entire area of Sangam is seen not only in the day but in the night also, it is being seen as a wonderful light. Prayagraj was never decorated with such beauty before. The colorful lights on the Ghat of Sangam are also full of pilgrims. The residents of Prayagraj are not getting swollen about this and the Yogis are reading alms in praise of the government.

An elderly woman resident of Prayagraj says that she saw Kumbh fair very well, but never seen such settlement. Vijay Kiran Anand, the special mercenary appointed by the yogi government for the Kumbh Mela, is observing preparations on the Sangam till night and night. This time the pilgrims and tourists will get a new look at Kumbh Mahaparv.

Fair Officer Vijay Kiran Anand explains that this time Aquarius will give a new experience. He said that pilgrims should be given a memorable experience, hence Divine Kumbh has been envisaged. A 10-kilometer long ghat and changing rooms have been built at Sangam. One lakh 22 thousand 500 toilets have been constructed under Clean Aquarius hypothesis and 20,000 employees have been deployed for cleanliness.

According to the administration this year, there are estimated to be 12 million passengers in Kumbh. Fair officials are busy preparing this data keeping in view. Railways have not left any stone unturned to increase the beauty of Prayagraj. The old iron bridge over the Yamuna is also decorated with light. Its rays on the Yamuna are making the scene enchanting. It is obvious that the Yogi Sarkar wants to make the fair divine, but the challenge will start when the arrival of pilgrims starts.


Come, know how is the arrangement of kumbh