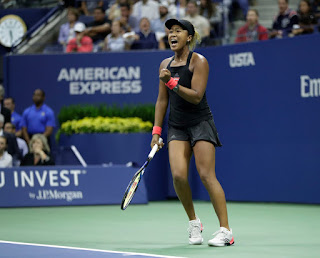 The Japanese Tennis player has created the history by defeating the world number one champion and two times winner Petra kvitova.The 21 year Japanese player had winned her second grand slam after beating serena williams in the US open final few months ago.

She had defeated Petra after having a great competition  with her by 7-6,5-7 and 6-4 on satuarday in Melborne.When Naomi had won the match instead of jumping rejoycing perhaps she bowed her head to Petra and to the audience sitting on the ground and said thanks to them also to the entire teams and organisation which heped these match in a good condition.

Naomi was born in japan to a haitian father and japanese mother and when she was 3 years old they came to america started living there,then there she and her sister shown there interest for tennis.
Her father was very much inspired by the williams sisters games , so he indulges them into the game at a very earlier age and started their training.Her parents decided that she will represent japan.
In her childhood days she was trained with so many childrens in osaka city.

1 year ago she was on the 72th rank in the world tennis ranking now she is the new queen.
Japanese are very happy with her such a great performs and are feeling proud about her.Due to her busy schedule she had mostly been out of japan and knows very little japanese.By speaking such a good english she is breaking the barrier for others who want to learn english.

She is a very shy and reserved player ,which her demeanour dominates which had made her very popular in and outside of the court among the others.She is very strong and focused player who always thinks of the game.

In her statement “ She said that,this tournament had taught her so much that how you can win any game just by your strong will power and desire to win.”