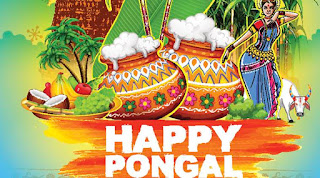 Some peoples don't know that Pongal is the festival of which state.Pongal  is the  festival of farmers and it is celebrated mainly in South India. This festival, which is celebrated for four days, is dedicated to the god of agriculture and crop. Devotees, which are traditionally offered to Lord Suryadev on this festival dedicated to prosperity, are called pogals, due to which the name of this festival is called Pongal.
In many states Pongal is also been named as Makar Sanskranti Specially in maharastra,Gujrat,Punjab,Delhi and Uttar pradesh.

Pongal will be celebrated on January 14  every year.

Pongal is a four-day festival. Its first day is celebrated in the form of a respected Bhogi festival of Lord Indra. This is done for this reason because Lord Indra is the highest ruler of the clouds which gives rain. For the abundance of the crop, tribute is given to Lord Indra, which provides rich wealth and prosperity in the country.  Another ritual is celebrated on this day, namely Bhogi Mantalu. In this celebration, waste products of the house are thrown out of wood and cow dung fire. Girls dance around the fire and sing songs in praise of the gods.

On the second day of Pongal, the work of worship or artificial worship is done when pongal (rice) is boiled in a pottery in the milk outside the house and it is offered to the Lord Surya along with other divine objects. All people wear traditional costumes and signs. Another interesting ritual is also where the husband and wife especially distribute the utensils of worship. Pongal celebrations are generally celebrated in the village but with the same devotion .According to the appointed ritual, a turmeric plant is bundled around the pot in which the rice will be boiled. Prasad includes  coconut and banana dishes and sugarcane. Apart from Prasad, a common feature of worship is Kollam. Kollam is auspicious design which is traditionally made in white lime powder in the morning in the morning after bathing.

The third day is known as Mattu Pongal and it is kept for the cow. In the neck of the cow, the beads of beads and floral beads are built and worshiped. They are brought in pongal to the centers of the village. The sounds of cattle bells attract villagers and people tie their cattle together.
Also Read | Short Quotes About Life and Love

The cattle's artisan is removed so that they do not have a bad look. According to one story, Shiva asked his bull to go to Earth and asked him to massage and bath the oil every day and eat it once a month. Inadvertently Baswa announced that everyone should eat daily and should take a bath with oil once a month. This mistake made Shiva angry and he cursed Baswa that he must live forever on earth and solve the fields of the people so that people can get help in generating more food. Thus there is a relation with the cattle in this day.(Too wish your father click here)

Also Read | Happy Diwali Quotes and Messages
The last day of Pongal is called kannum Pongal. On this day turmeric leaves are washed and then kept on the ground. Many types of food are kept on this leaf like sweet rice, betel nut, sugarcane etc.

Appam - How To Make Appam

Pongal is an important festival of South India. An important feature of this festival which lasted for four days is food created during this time. Kheer is made in pottery on the second day of pongal which is very tasty. So let's come. Let's learn how to make you today. Make Pongal Kheer and Appam on the occasion of Pongal.Appam receipe with rice flour is also been made and Peoples in Kerala appam receipe without yeast are also famous.

Appam is a famous dish of South India. It is very easy to make. So let's learn how to make it.

Pongal is celebrated very loudly in South India with loud noise. This day is the fight of oxen which is quite famous. At night, people organize a communal feast and wish each other a happy year. On this sacred occasion people express gratitude towards Lord Sun God for crop, light in life etc.

• First, take the dry rice rice in the water. Then add cooked rice and 1/2 cup coconut milk and grind it into a mixer and make a soft mixture. Now you have to put yeast in this mixture. Before adding yeast, add a little lukewarm water to it and mix it well. Now mix sugar, salt and remaining coconut milk in this mixture and mix well. Now cover the mixture for some time.

• Put a little oil on a non stick pan. Then disperse the solution with the spoon on the pan. Spread it like this so that the edges are thin and the middle part is thicker. Cover it and cook it for about a minute. Take your delicious appmus ready. You can serve it with Sambhar.

First wash the rice and soak for some time. If the rice will be soaked then it cooks fast. There is no need to soak moong dal because it melts very easily. Now heat the ghee in a cooker and add pulses and let it run a bit. Then put rice in it and put water and close the cooker.

Now take a jar in a pan and make a sugar syrup. Boil it with half a glass of water. Then put the water of jaggery in the cooker. When the rice is cooked, turn off the gas and add cashew-raisins, cloves and cardamom from the top and mix well and stop the cooker's lid for some time. Now  your pongal kheer ready.
Click here for Padustkitchen for making Ven pongal sambar recipe .