Syria – attack on US army 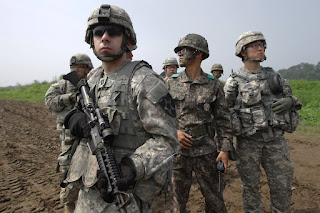 On Wednesday in Syria an attack has occurred on us army , it raises a question mark on US army and also criticised the claim of President Donald trumph’s statement that the Islamic states are under control and also defeated.The attack has again raises an alarm on the debate that , did us withdraws his all troops from that country.
In the northen Syria city Manbij around 1:00 pm of the lpocal time of Syria a bomber had blewed himself which was under the control of the us army. The ISIS had taken the responsibility of the same.
In this attack 4 army men’s of the us army were killed and approximately 10 peoples from the locals had died.2 out of them were US service members and one defence contactor, one was a senior intelligence officer.As per the us army they were doing there routine patrolling.
Advertisement 2
 Newer Post Next Posts  Home
Advertisement 1
 Newer Post Next Posts  Home