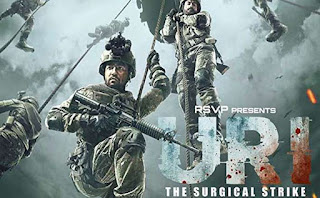 If we talk about Bollywood makers, serving patriotism on the screen of the cinema is not new. There are many films including 'Reality', 'Border', 'LoC Karigal', 'Goal', where War has been made. There is also a different class of such films. On the same class, such films get fine opening on the ticket window. Of course, this film, released this Friday, did not fit any masala bypassing the script which proved to be the criterion for every class audience.

Young director is based on the real event of 'Uri: The Surgical Strike' of nearly two-and-a-half hours, directed by Aditya Dhar. The readers will remember that in September 2016, the Indian Army took the revenge of the same Uri attack on the country's Pakistan by crossing LoC, where many Indian soldiers were martyred. Young director Aditya Dhar would have to be praised that he kept the film completely on the track and tied the audience till the end. Well, if we talk about Vicky skills, before this film appeared in the uniform of Pakistani Army officers in 'Raji', this time, this time in the finest of the Indian Army officers, he proved that he is included in the list of the best artists of the industry.
.
Army officer Vihan Shergil (Vicky Kaushal) has to teach the Pak army a lesson after crossing the border after the fatal terrorist attack in Uri, with his unit. Vihan has to execute this entire surgical strike and the entire planning of this attack is to be done by Vihan. Because of this, Vihan has mastered the planning and planning in any mission. That is why the top army officers decide to hand over this surgical strike mission to them. Second half of this film focuses on planning and action of surgical strikes and this is the USP of this film. The climax of the film has been presented in such a formidable manner that every audience sitting in the hall is tied to his chair even after being fully aware of climax. Since the story of this film is centered around Vihan, and because of this, many important characters of the film are kept depressing.

It is arguably a movie on patriotism. Highly applauded in the hall on most dialogues of the film. Vihan's dialogue "They want Kashmir and we head on their heads" and then the whole hall echoed with applause. All the heads of war are sensible. If the bullets are shot in the film, then kick in the field of jungle is also very good. Seeing the action sequences of the film, it seems clear that Vicky has made special efforts for this film. Their dialog delivery is perfect. Kirti Kulhari did not get much scary in the part, but Kirti played her character well, while Yamani talked about Gautam, she was deeply on kirti. TV star Mohit Raina has killed his character.

After the interval, the speed of the film stops. If Pakistan's flag is being shown in many wars of war, then seeing the film's many scenes it seems that as the makers are campaigning for a party for the general elections this year.

Along with the wonderful acting of Vicky skills, the film gives us the feeling of being Indian. War Sean is the USP of this film If you are fond of watching films of war and leek then do not miss this movie. Only the time passes or the movies of Bollywood's current spices can be upset with the 'Uri' class of the audience.