Earthquake shocks again in several states including Delhi-NCR, scared for the second time in four days


New Delhi:  Within four days, the earthquake of Delhi-NCR came again, however, there is no news of any harm. People at Delhi-NCR feel the vibration of the earthquake at 10.27 minutes. According to the news agency, earthquake shocks were felt in Jammu and Kashmir and Himachal Pradesh along with Delhi-NCR. According to the international agency EMS, earthquake intensity was 5.6. According to the agency, there were earthquake shocks in and around Kashmir. At the same time, the Shimla earthquake center told the quake in Chamba 3 minutes and 3.2 and 3 hours 40 minutes after the second shock that came in the mandi was described as 3.8 intensity. Earthquake tremors have also been felt in Pakistan's Islamabad, Lahore and Rawalpindi.
The center of the earthquake is located 118 kilometers away from Srinagar in north-west Kashmir, 40 km below ground. There is no news of the loss of any kind of damage to the earthquake at this time. Due to panic people came out of the house. Earthquake tremors were felt at different times in Chamba and Mandi in Himachal Pradesh. Tell us that earthquake tremors were felt in Delhi-NCR on Saturday evening even before four days ago. In Delhi-NCR, shocks were felt around six o'clock in the evening on Saturday evening. The intensity of the earthquake was 6.4 and its center was within 200 meters of the Hinduquush mountain range.
Earthquake shocks were light, but in Delhi, people felt in Noida, Ghaziabad, Faridabad, Sonepat. According to the information, earthquake shocks were felt in Delhi, except in Delhi (Sonipat, Faridabad, Gururgram, Palwal, Ballabhgarh) and UP (Noida, Ghaziabad).
Why do earthquakes come?
The earth is located on twelve tactonic plates, under which the fluid is in the form of lava. These plates are floating on lava. Earthquakes occur only after colliding with them. Tectonic plates shake and move away from their place. Each year, these plates slip from their position to about 4 to 5 mm. Sometimes these plates collide with each other in this order. Because of which earthquakes occur. 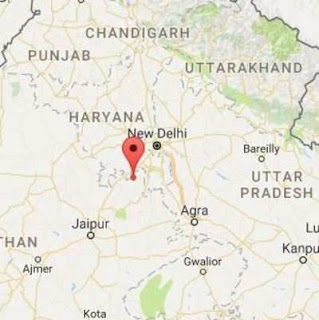 Let us know here that Delhi comes in Zone IV, while Mumbai and Kolkata are in Zone 3. It is a different matter that till now no major earthquake has occurred in the major cities of the country, Delhi, Mumbai and Kolkata. Delhi is located in the earthquake zone-4, so there is more chance of an earthquake. According to historical signs, a terrible earthquake can occur at any time. This lesson comes from Bihar earthquake in 1934 and Assam in 1950.
According to geologists, the 1950 Assam earthquake has prepared a major earthquake in Himalayas. 65 years have passed since the earthquake and it is possible that there will be a tremendous earthquake.
Delhi will not be able to catch earthquake
Please tell that there is a large problem of the Delhi-NCR region as well as the population density. Lakhs of buildings are decades old in the Capital of Delhi, which has a population of around two crore, and all the neighborhoods are adjacent to each other. In such a situation, there will be heavy loss of life in the event of a major earthquake. Anyway, there is a fault line near the Panipat area, located just a few miles away from Delhi, due to which earthquake can not be ruled out.
70-80% of buildings in Delhi are under dangerous condition:
Experts also believe that there is a danger from the earthquake in Delhi as well as weak buildings. According to an estimate, 70-80% of the buildings in Delhi are not built to withstand a major setback from the earthquake.
What to do if an earthquake occurs :
Do not panic if the earthquake is felt. Should stand in an empty place outside the house. Take the children and the elderly out of the house first, stand in the shore. Heavy luggage in the house should not be above the head.