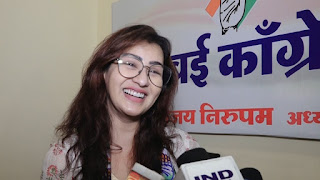 Popular TV actress ShilpaShinde (ShilpaShinde) has joined Congress on Tuesday in the name of 'AnguriBhabhi'. ShilpaShinde joined Congress in the presence of Mumbai Congress Committee President and party leader Charan Singh Sapra. Shilpa has been a winner of 'Bigg Boss 11' and is quite popular. Shilpa has also been discussing a lot about her disputes. There was a lot of controversy with the producer of the show Shilpa, who had fame from the TV show BhabhijiGhar par haan. After which she had to leave this show

ShilpaShinde started her career in 1999. ShilpaShinde was born on August 28, 1977 in a middle-class family of Maharashtra. Her father Dr. SatyadevShinde was a judge in the High Court, while her  motherGeetaSatyadevShinde is a housewife. Shilpa has two elder sisters and a younger brother. She was a student of psychology at Casey College, Mumbai, but failed to get a bachelor's degree. Her  father wanted him to study law, but he had no interest in it.

In 2013, Shilpa's father died of Alzheimer's disease. Her
father did not want her toact. Shinde said, 'He never wanted me to act, but when I insisted, he gave me a year's time and I became an actress.'