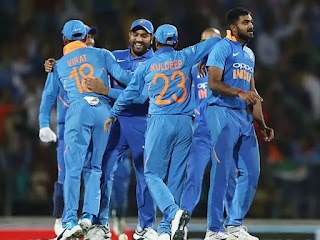 A great match was played between India and Australia in nagpur today.Australia was the toss and offered the India to bat first.

The start of the Indian side was not that much good they had loosed the wickets earlier of rohit sharma and shikar dhawan as usual.The pitch today had  supported spinners.

Virat kholi had made a magnificent 116 in 120 balls and this was his 40th hundred and sachin would have made 49th centuries.Vijay shankar had helped the momentum going by making a great partnership with kholi and had made 46 runs in 41 balls.

India had made 250 runs in 48.2 overs and got all out by the Australian team.
The start of the austrailian team was very good and the batting  of stoinis was also very good. Stoinis had batted very well under the pressure.

In the last two overs Australian team needs 20 runs the ball given to shami and upto now Australia had lost 8 wickets. Shami had given 9 runs in this over.in the last over Australia needed 11 runs to wins.It was a great tension time for Indian team and a hectic situation.

But in the last Virat kholi had made a decision to give the last over to Vijay shankar. On his 1st bowl he plumbed the stoinis which was in the ground and was the only player who had turned the game.Again on the 3rd bowl of the last over again vijay shankar bowled the zampa .

India had win this match with 8 runs and this was India’s 500th international ODI win.