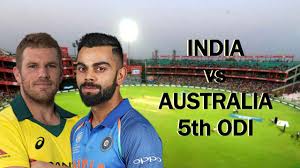 
India vs Australia 5th ODI will be played in Delhi between India and Australia. The Australian team will play their last match of the tour of India this year at the Feroz Shah Kotla ground in Delhi. In the five-match ODI series, both teams are currently on the same lines as 2-2. There are no two opinions that no team will make the mistake of taking this match lightly. For some time, our opening pair of out-of-form sparked hopes of coming in form by playing finest innings in Mohali.

But, now the point of concern is the bowler. What does proving the 358 score do not define? Bhubaneswar and Chahal were never seen in the ground. Australia scored most runs on these balls. Kuldeep and Bumrah too were not seen for which they were known. It is better to feed Lokesh Rahul to Ambati Rayudu. IPL hero Ambati Rayudu appears to be unfit in international cricket. By making runs in any one innings, their position is not confirmed in the World Cup 2019 team. Nonetheless, the potential of playing both teams in India can be as follows 11 in Ind vs Aus 5th ODI.

Both team tied the series with 2-2.This match will decide  which team will win the series.As Indian team had already lost the T20 series.