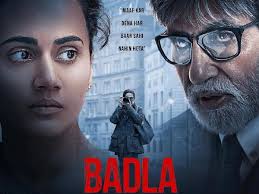 Draupadi said that the change is not always right, but forgiveness is also not always right ', the film revolves around the dialogue of director Sujoy Ghosh's' Revenge'. Sujoy's Suspense Thriller is an official remake of the Spanish film 'The Invisible Guest'. Those who did not see the original film, kept their suspense, thrill and power packed performance and did not disappoint the people who have seen the original movie.

The story is a well known award winner business woman NainaSethi (TapasiPannu), who is accused of a murder. She hires the famous and well-known lawyer, Badal Gupta, Amitabh Bachchan, through his legal advisor Kaul. Badal Gupta is a clear loyalty to the evidence and that is why he did not lose a single case in 40 years of career. Investigating Nain, he realizes that Arjun Tony had an affair with Luke, although Naina considers him a mistake and tells Badal that he was being blackmailed and framed by planning in murder. She just loves her husband and child. During the interrogation and conversation, the story is about the entry of other characters like Rani (Amrita Singh) and her husband and some facts come out that are changing the look of the case. Will the Badal maintain the track record of winning every single case? Will he prove Nain innocent and save his family and professional credentials? For this, you have to watch the movie.

As far as direction is concerned, Sujoy chose the best Murder Mystery as 'Suspense-thriller' as 'The Invisible Guest', but by remaking it could not save it from being a critical one. The film's screenplay should have been more and more, however, the suspense of the film maintains curiosity. If the film is from two characters, i.e., Tapasi and Amitabh, then there are repeated appearances in many places, But the film does not bore. Complex stories have been the favorites of Sujoy. Here also the complexity remains through the characters and their layers open, but in the pre-climax  there is a climax, which does not end up in the Spanish film.

Cinematographer Avik Mukhopadhyay has maintained the film's tone according to the subject. Amitabh Bachchan is said to be the chief of the century, not only because he understands the role of mannerism and mood, but also maintains the process of action-reaction by understanding the importance of the front actor. He has understood the character's nuances very well.

As a Tapasi Pannu actress, she is not scared just in front of the superhero, and she has proved it in Pink as soon as she had done Jugalbandi for the first time with Bachchan. In the form of Naina,she has performed the character's innocence and hypothesis. Amrita Singh looks good on screen on a strong performance. Why did Kaul do this role, it is beyond comprehension, because there was nothing to do in their part. South Actor Tony Luke is right in the form of Arjun, but his accent stands. In such films, there is less space for music, but background score could be strong.