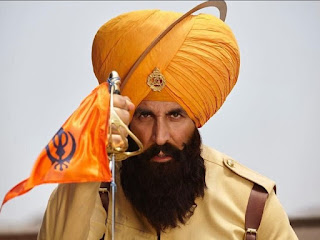 Kesari released and break the record

Directed by Anurag Singh's film, Kesari, the first day of release is amazing. The film earned 21 crores, which is the first biggest collection of first-year this year.

Akshay Kumar's biggest opening day after 'Gold' 'Gold' was also released on National Holiday. According to the reports, the opening of the film happened in the afternoon in Holi, due to which the hall was filled with the noise like National Holiday.

The record collection of the film was recorded in Gujarat. After the 'Sanju', this was the biggest collection in the last 15 months. In this belt the business was even better than East Punjab.

The rest were influenced by the Holi collection on single screens in Madhya Pradesh, Chhattisgarh, Rajasthan, Uttar Pradesh and Bihar.

The story of the battle of Saragarhi fought in the movie Kesari 1897. In this Akshay Kumar is in the role of Sepoy Eshar Singh of the 36th Sikh Regiment of the British Army.

This war was a great war fought between the Sikh regiment very bravely and without losing their post they dies after that.