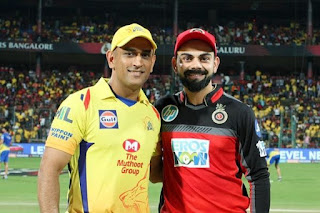 It was right that Dhoni's 'target', Chennai won by 7 wickets, Raina made history
IPL 2019: The inaugural match of the Indian Premier League proved to be one-sided between veteran Chennai Super Kings and Royal Challengers Bangaloreore. In the first match of the tournament, the pitch was not ideal at all. The audience did not enjoy the shots, but Chennai started their campaign with victory.

In the only match of the Indian Premier League (IPL) -12, Chennai Super Kings started their campaign by winning a very easy win. The easy target of 71 runs scored on a little difficult pitch was achieved by Chennai losing three wickets in just 17.4 overs. Ambati Rayudu scored 28, then Kedar Jadhav 13 and Ravindra Jadeja remained unbeaten on 6. One-a-word came in the part of Chahal, Mohammad Siraj and Moin Ali. In the opening session, the Royal Challengers' innings were reduced to just 70 runs in 17.1 overs after being invited to bat first before Chennai.

In fact, there were two big reasons for bad weather in Bangalore. Toss proved to be a very big factor in the match, which went in favor of Chennai. Dhoni had already read the pitch very accurately and came out on the field with full preparation with three spinners. Choosing the three spinners in XI was enough to tell that Mahi chose a bowling attack according to the pitch. After this the importance was also toss. And when it went in favor of it, it did the work of sleeping on gold. When he picked up the bowlers, the spinners fully proved their decision, taking eight wickets out of ten, prepared the basis of Chennai's victory in the first session.

With the passing of time, the pitch became slow and it became difficult to bat on the pitch  for Bangalore. However, Suresh Raina made a big history. Suresh Raina completed five thousand runs in IPL in his short run in 19 runs. Suresh Raina became the first batsman to become the first player in this IPL history. At the same time, Harbhajan Singh was adjudged Man of the Match.

The Pitch of the Chidambaram Stadium had already proved in the session that it is useless to talk about power here. Seeing the target of 71, there was no need to show the power of unnecessarily. But where do the aggressive bats come? Shane Watson, who was forced to flutter in the third over, tried to flutter Yuswendra Chahal. With this, the beginning of Chennai also got worsened. Watson could not open the account too. English Officer Moin Ali took a good test of patience and patience of Rayudu and Raina. Overall, in the first six overs of power-play, Chennai's batsmen were also slow on Bangalore. And during this time Chennai's score was only 16 runs on 1 wicket.

When Watson was dismissed cheaply, then the Chennai batsmen realized that there would be no grandfather on this pitch. And there is no alternative except to coordinate with the pitch. Raydu, however, showed a lot of confidence in the second over when he was caught by Ravindra Jadeja in the second over, but it was better to take Watson's wicket away from him as a defensive approach.
Wicket Fall: 8-1 (Watson, 2.1), 40-2 (Raina, 9.2), 59-3 (Raydu, 14.2)

Earlier, cricket lovers got to see a different cricket. Virat Kohli's Royal Challengers Bangalore were not able to play twenty overs of the quota while batting first after getting the invitation for batting before Chennai, and got stacked on only 70 runs. How bad is the situation for Bangalore, it can be understood from this that Parthiv Patel, who started off the innings, was dismissed as the last batsman and top scored with 29 runs. No other batsman except the Parthiv could touch the figure of the tenth. For Chennai, Harbhajan Singh and Imran Tahir picked up three wickets, while Ravindra Jadeja took two wickets and Dwayne Bravo took one wicket.

Nor did the Bangalore batsmen run in the power-play. Nor after that. The slowerness in the pitch increased, the spell of Chennai's spinners also increased. Things like this, that the batsman like AB de Villiers was left helpless! If this legendary batsman returned the pavilion, then the mood swings changed. Dhoni has fielding as if he is playing a Test match. Batsmans fall of wicket  was left out Bangalore's pavilion returned to Bangalore at regular intervals before the innings shifted. The result was that Bangalore's entire 20 overs of the quota could not play. And his entire innings was reduced to just 70 runs in 17.1 overs. Most runs scored by Parthiv Patel, who came out as the 29th batsman in the tenth batting.

Bangalore captain Virat Kohli got a new look in the first match of the new season. Openers, but opener few and number three batsmen only appear. Young seamer Deepak Chahar swung and tied the bat to length. And when Harbhajan came in the fourth over, then Kohli was caught in the trap of the veteran Sardar. Trying to pull a small ball, but Jadeja, standing on the ball straight mid-midwicket. As captain, chapter ends! Kohli could only make seven runs.

No team knew that the ball would be so slow after the ball. Overwhelmed, this slowedness increased, but it became a problem for Bangalore's batsmen. The reason for this was that Moin Ali, who started off with a six-wicket, fell into the sixth over with Bhajji slow down. And after the second wicket, Harbhajan started screaming about his experience. The intention of picking up runs in Bangalore's initial six overs is completely battered. Only 33 runs could be made in 2-wickets in power-play. The runs were fine, looking at the pitch, but two wickets fell Bangalore's parrots!

Earlier, Chennai had given three foreigners Shane Watson, Dwayne Bravo and Imran Tahir to their team, then Bangalore has given Shimron Hetmayer, AB de Villiers, Moin Ali and Colin de Grandhom in the Eleven as foreign players. It was the first IPL match to play for the West Indies, but its debut was not memorable and he could not open the account.

Both teams were rated as follows: