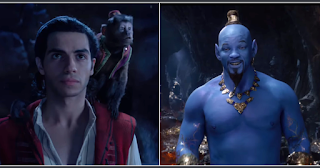 
It’s interesting to know that Disney had dropped the official trailer for the upcoming live action version of Aladdin movie and this movie is a new experience for the fans present in the world all around because  this movie is the animated version of 1992  film.


Will smith has done the character of the blue men genie,also trailer shows his roles are changing in the film.He will be seen fullfill the wishes of all his king who so ever is going to free him from his bottle.

This film is directed by the director Guy Ritchie,stay navid Neganban as sultan,frank welker as abu,jafar as marwen kenzari,Naomi plays the role of princess jasmine and mena massoud  played the role of Aladdin.

It shows that the film will shows the features of the movie’s iconic songs like “ a whole new world”,which had won the grammy award award for the song of the year,this song was the first song which was the first of this catergory and also this song had won the Oscar awards too.