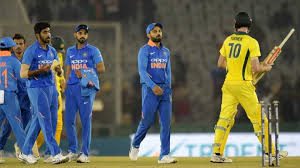 Today at Mohali a magnificent match was played between India and austrailia. The teams were very strong.In the 3rd ODI indian team has lost the game so this time few changes were made  by captain virat kholi. M.S dhoni was given rest in this match.


India won the toss and elected to bat first.Indian team knows that there will be dew on the ground in the evening but even after that they eleected to bat first.
India has scored  358 runs in 50 overs, Shikhar dhawan had played a great innings after a long time and made his 15th international century 143 runs against austrailia.Rohit sharma had also made a good parternership by contributing his 95 runs in 97 bowls after a long time.Bumbara hitted a six on the last bowl.


The pitch of mohali is always remain a batting pitch and to bowl at this pitch always remain a tough task to perform.So today in this match batsman of both the team had played really well.
The start of the austrailian team was not that much good they would have lost there 2 wickets very earlier,at this time the whole match was under the control of the indian cricket team and the bowlers were also bowling well.


Know this was a time for khawaja and handscomb to show there talent which they both proved on the ground by playing there great innings.Khawaja had made 91 runs on 99 bowls and Handscomb had made the runs by 117 runs on 105 bowls.They had made a good parternship for austrailia to reach the score.


But the game changer of the match was Turner who had totally changed the game after the fall of wickets of austrailian team.Austrailia was on the verge on losing this game.The turner who was playing his 2nd international 1 day had played sucha a magnificient innings.He was dropped 3 times by the indian team.once his stump was missed by rishabh ppant and 2 times his catch was dropped.
After that turner had played in full swing and turned the full game.Turner had made 84 runs on 43 bowls which was a superb innings played under pressure It was his 1st ODI fifty.After this match turner said that know he has got a great confidence which will help him in the future also.


Austrailia  had won this match with 6wickets.