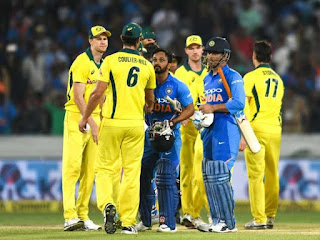 In the first ODI, played at the Rajiv Gandhi International Stadium in Hyderabad, India defeated Australia by six wickets to take a 1-0 lead in the five-match series. Australia, batting first, won the toss and decided to baat first 236 runs in 50 overs , losing 7 wickets. In reply, India responded with an unbeaten half-century of Kedar Jadhav (81 *, 87 balls, 9 fours, and 1 six) and Mahendra Singh Dhoni (59 * runs, 72 balls, 6 fours, 1 six) in 48.2 overs, 240 / By making 4 runs, the match took 6 wickets.Kedar Jadhav was chosen as the Man of the Match for his finest innings.

Earlier, Australia captain Aaron Finch won the toss and decided to bat first. But Jaspreet Bumrah proved his decision wrong in the second over of the innings. Aaron Finch opened the account without Jaspreet Bumrah's delivery on the ball behind the wicket by Mahendra Singh Dhoni. After this, Marcus Stonis and Usman Khawaja shared 86 runs in 19.4 overs for the second wicket. Kedar Jadhav endured his innings by scoring a special score of 37 against Marcus Stonis at the hands of Kohli. Usman Khawaja also became the victim of Kuldeep jadav on personal score of 50 runs. He was caught by Vijay Shankar.

Khwaja, Maxwell and Carrie are the top scorers for Australia

In reply to this, India's start was not very good and openers Shikhar Dhawan became the victim of Nathan Coolter-Nile on the first ball of the second over of the innings. Shikhar Dhawan was caught in the hands of Glenn Maxwell at the opened point of account. Rohit Sharma and captain Virat Kohli added 76 runs for the second wicket in 15.5 overs. Virat Kohli returned to the pavilion with a 44-run third wicket stand of Adam Jampa on the individual score. When India's score was 95, then Rohit Sharma became the victim of Polter-Nile on his personal score of 37. Immediately after this, Ambati Rayudu was caught by Alex Carrie on the personal score of 13 runs on the wicket of Adam Jampa. But Dhoni and Jadhav did not allow India to get any more blow from here and gave an unbeaten partnership of 141 runs for the fifth wicket in 24.5 overs to give India a 6-wicket win. Nathan Coulter-Nile and Adam Jampa took 2-2 wickets for Australia.