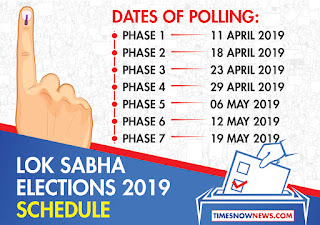 The announcement of the dates of the assembly and assembly elections of five states with which it was announced today. Chief Election Commissioner Sunil Arora said: Lok Sabha elections will be conducted in 7 phases. Voting will be done for the first phase on April 11. Results come on May 23 Arora said that this time around 90 crore voters will be in the Lok Sabha elections. These include 84 million new voters. Out of the total voters, 99.3 has voter ID.

15 million voters are aged 18-19 years old. A code of conduct has been implemented throughout the country for the Lok Sabha elections today. In this election, on the one hand, the Bharatiya Janata Party-led NDA is on the other side, on the other hand, a great coalition is going on to meet Prime Minister Modi. However, its outline clearly has not been revealed so far.

PM Modi had give greetings to all the parties and had told them and to the peoples of india to came up for giving up a good life for yourself by shwoing there vote power.

Following are the phases :-