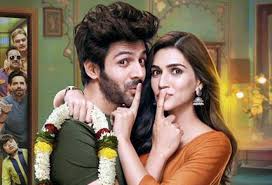 Although our law has given permission for live in relationships, but even today a very large section of society does not see it with a good eye. For them, the sacred bond of marriage is paramount, whereas today's youth is not in the mood to make blind decisions in the case of their partner. He wants to choose his spouse by examining him, and by introducing such two different thinking characters, director LaxmanUtekar has woven the story of 'LukkaChuppi', where the hero Guddu (Karthik Aryan) believes that if there is love, So why not get married to strengthen that love, while the heroine (Rashmi) believes that there is good love, but what is the problem in trying to live by her whether her partner is right to live together or not.

The story of the film is from a small town like Mathura, where Guddu is the star reporter of a local cable channel. Rashmi is the only daughter of a political party and supremo Trivedi (Vinay Pathak) of the culture group, who has come from Delhi to study the media. Under internship she joins Guddu's local cable channel, where both of them are in love. It was fine too, but the twist comes in the story when Rishmi wants to test him by living with Guddu. The point is that Rashmi's father, Trivedi, has strongly opposed actor Naajim Khan's live biography and has banned his films. Now the horrors of his party members are roaming on Mathura's Love couples. The members of his party do not miss the joys of blinding their faces. In this case, Guddu's friend Abbas (ApharashaktiKhurana) impersonates that they are going to Gwalior for a story to be made for the channel, then in this 20-day assignment, both of them can try each other in Gwalior.

In Gwalior, after taking the house of both rents, after taking them into marriage, they decide to get married, but only then their eyes are looked on. Guddu's brother's brother Babulal (Pankaj Tripathi) looks at both of them and treats Gurdial as the Married Couple, to Guddi's entire family. After bashing Guddu, the family of both of them regard them as married, but the trouble of Guddu and Rashmi is that both of them have not been married, and now both of them hide and seek in a triumph.
Directed by LaxmanUtekar, through his film, he has picked up a very topical theme such as Live. The movie starts with very light moments. There is not much difference in First Half, but in the second half the story goes forward with many funny turns and twists. The director has also taken cognizance of Moral Policing on the pretext of marriage and Live Inn, but in very light manner. The film also touches the gender equality, cast system and small city thinking. In the first half of the film, Gudduand Rashmi do not take home screenings during their stay. However, the fun moments of the Sequential Comedy entertain the whole movie.

Kartik is very dear to Guddu. The innocence of his expressions and the honesty of the eyes makes the character poor as well. Karthik's childhood stability strengthens his character. After the 'Bareilly Ki Barfi', Master Saina has once again played her role in her own style. The chemistry of both has been amazing. In the film, Pankaj Tripathi played the role of Babulal in his special comic style. Immaculate Khurana is also remembered as Abbas. Supporting cast of a supporting cast film has proved to be a strong pillar. Everyone's comic timing is so stupid.

The music of the film has been composed by many musicians and their effort has proved to be successful. The song's song 'Coca Cola' is on the 8th rank of Radio Mirchi and 'Poster Lagwa II' is at 13th position.