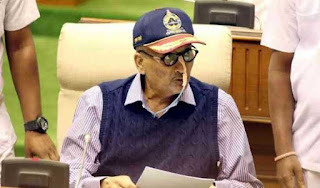 
Goa's Chief Minister Manohar Parikar's condition is getting worse. For this reason, on Saturday, BJP appeared to be exercising its government in the state, because Congress has written a letter to the governor and once again claimed to form the government. On the other hand, the BJP has started looking for the new chief minister.

In the legislative party meeting on Saturday evening, BJP legislators have told party leaders that one should be one of the chief ministers. It is likely that the BJP central leadership will send its envoy to Goa to finalize the Chief Ministerial candidate by discussing with the MLAs. He will also hold meetings with alliance partners.

Earlier in the day, the Congress had written a letter to Governor Mridula Sinha writing a letter to make a government in Goa. The party said that since the demise of Francis D'Souza, there are 13 BJP MLAs in the Legislative Assembly. The Manohar Parikar-led government has lost the faith of people. In such a situation, the party which is in minority, has no right to live in government. We want the present government to be sacked and the largest party Congress has the chance to form the government.