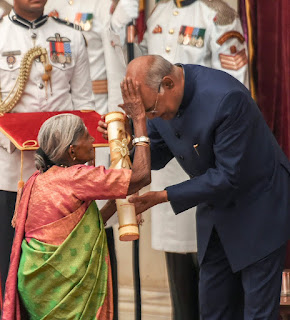 Padma awards given to salamarmada by President


A strong Protocol of Rashtrapati Bhavan in the distribution ceremony of the Padma Awards also prevented the blessings of Padma Shri, 106-year-old Salamarmada, for blessing thousands of trees in Karnataka to bless President Ramnath Kovind. Taking the prize, Themekaka has put the president's forehead in the form of blessings. Themekas has more than 8000 trees, including 400 trees of banyan and it is the reason that they got the title of 'tree mata'.

He was awarded the Padma Award along with other winners on Saturday in Rashtrapati Bhavan. In a ceremony held under strict protocol, the theme song, wearing a light green sari, kept 'Tripurand' on its forehead with its smiling face. When the 33-year-old President of Prabhakkara asked him to face his face while giving a prize, he touched the president's head and blessed him. This easy step of the theme song smiled on the faces of the President, the Prime Minister and other guests and the function room enthusiastically burst into applause.

Prime Minister Narendra Modi, his cabinet colleagues Rajnath Singh, Harshvardhan, Rajyavardhan Singh Rathore, Vijay Goyal along with senior BJP leader LK Advani and senior government officials were present in the program held at the Darbar Hall of Rashtrapati Bhavan. 112 'motivational' celebrities were selected for this year's Padma Awards and their names were announced on the eve of the Republic Day this year. Awards are provided in two programs. 47 dignitaries were honored on March 11 while 54 were honored on Saturday.