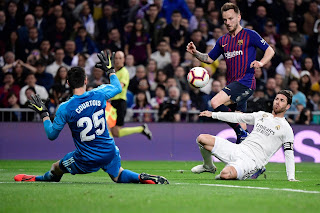 Barcelona over 87 years after Real Madrid

Barcelona's 96th win in all the bouts, so far between the two teams, Real won 95

Barcelona won the El Clásico for the second time in four days. He beat Real Madrid on his home ground for the second consecutive time. In La Liga, Barcelona made their name in this match 1-0. During this match, the captain of the Sergio Sergio Ramos controversy got entangled. He fouled against Messi in the 42nd minute. Ramos hit Macy's face, causing the bleeding of Barcelona's captain to bleed. After this Messi and Ramos hit each other in anger.

1.Ramos has been a disputed player in El-Clásico. They have got the most red cards so far. He has been a member of the team that lost 20 times in the matches between the two teams. In this case they are also in the first place.

2.This is Barcelona's 96th win against Real. With this win, Barcelona left behind Ryal after 87 years. Riyal's name is 95 wins. Ivan Rukitich scored the only goal in the 26th minute.

3.Barcelona defeated Real in the second leg of the Copa del Rey semi-final on Wednesday, 3-0 in his homeground Bernabeu. The first leg match between the two was a 1-1 draw at Barcelona's homeground.

4.After 15 years, Real lost three consecutive matches to his home ground. He is in third place with 48 points in the table. He won 15 of the 26 matches and lost eight. Three matches were drawn. Barcelona is in first place with 60 points. He won 18 out of 26 matches Lost in two His six draws are drawn.