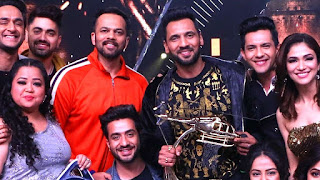 The Punit J pathak has won the Season 9 Of TV show Khatron ke khiladi.Punit said “ everthing thing is possible in this world either you to became a prime minister or tv actor,choregrapher or anything else”.He said that by keeping a positive attitude towards life then he or she can achieve his goal.

Punit was born and brought up in Mumbai and his father is business man.He wants his son to carry forward his business ahead, but due to his interest in dance he choosed to enter in bollywood.His father is from Gujrat.

The competition for all the contender was very tough and the palace they all were performing their task was very cold. Punit also said that earlier he had only has the experience of choreography, dance and little bit of acting, but this show has given him a different experience.He added that all the team members has overcome with the fear which they had in their minds by struggling with snakes,rapptiles and other creatures.

Punit said that this show had given him a great experience and a good confidence to deal all his work in future,working with rohit sir was also good.

He has won new maruti swift and price money Rs 20 lacs as the winning amount.