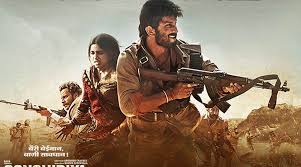 You can run away from people but how to run away from yourself? You can stop others' mouths but how will you stop the conscience? Sonchidiya is a story of regret and freedom in the rarest scenario. The performance of the actors and the tremendous cinematography makes this story even more intense.

Abhishek Chowbey has followed his style. The film is shown to people who are considered to be sinners. What is going on in their minds in front of their rebellion and death, the story has been created from these things. In this rugged film of Madhya Pradesh, Abhishek has tried to draw attention to the fact that what is actually true and what is wrong. Abhishek has used his characters very well for this. Man Singh (Manoj Bajpei) and his men, lawyers (RanvirShorey) and Lakhana (Sushant Singh) are the robbers who believe’s in God. They look for reasons for their living, question their existence.

The film is not based on crime even after being filled with things like robbery, police, fight, assault, but after the crime, the story of the situation of the criminals. Do these people suppress the villains in their own or do these villains dominate them?

This film has shown the rule of nature. The snake hunts the mouse and the eagle's snake. The rule is that the killer will also be killed one day. The film depicts caste system, patriarchy, gender identity and superstitions. The film also shows why there is a difference in revenge and justice.


Music of Vishal Bharadwaj and the voice of RekhaBhardwaj, succeeded in bringing the storm running inside the characters to the screen. Even in the special appeal, Manoj Bajpai has proved that he is a great actor. Sushant Singh Rajput has played the character of Lakhana wholeheartedly. Bhumi Pedenekar has done justice with the character of a brave woman and Ashutosh Rana has done a great deal of acting as an ant-hero.