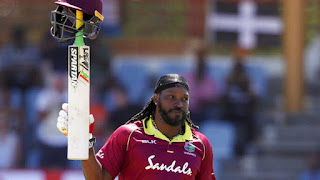 Chris Gayle, running into a destructive form, played another strong innings. On the Gross Isle Plate, England scored 5 th in the series against the West Indies and scored 5 boundaries and 9 sixes in the final one-dayer, scoring 77 runs in just 27 balls. Thanks to his stormy innings, the target of 114 runs from England was achieved only in 12.1 overs. Earlier, thanks to the fierce bowling of Osha Thomas (5 for 21), the West Indies piled on England for 113 runs.

Half century in just 19 bowls

Gayle, known as Universe Boss, gave a tremendous start to the host team, following a very easy target. He made the first over to hit Chris Woakes with two fours and a six. His stormy innings can be estimated from the fact that he has just completed half-century in 19 balls. When Gayle was bowled by Markwood at the 8th over, the West Indies had scored 93 runs.


Fastest fifty made in the ODI

It was the fastest fifty in the ODIs played by the West Indies. Gayle left behind Darren Sammy's record of 20 balls. Sammy made this record on 24 May 2010 in Antigua against South Africa. Talking about the world record of fastest half-century, it is the name of AB de Villiers of South Africa. In 2015, he made a world record against the West Indies in 15 balls with 15 and 31 balls.

424 runs scored in the series

Gayle, who has announced retirement after the World Cup to be held in England, won the man of the series award, scoring 424 runs in 4 innings in this five-match series. During this period, he averages 106 and striker 134.17. He scored two centuries and two half-centuries. His form can be estimated from this fact that in this series Gayle flew more than sixes (20 fours and 39 sixes).

These world records were made

1.Gayle made 39 sixes in the series 4 innings. He broke the world record of the most sixes in the bilateral One-day ODI series of Rohit Sharma (23 sixes in 6 innings, vs Australia).

3.Gayle made Moin Ali 11 sixes in this series This is the highest number of sixes bowled by any bowler in any ODI series.

4.He scored 424 runs in the series. That's just 4 inning. This is the highest run made in 4 innings during any ODI series.