A fierce fire in Notre-Dame Cathedral 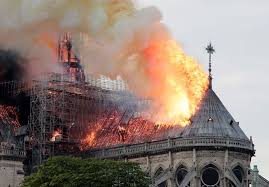 A fire broke out on Monday evening in the historic building of Notre-Dame Cathedral, in the heart of Paris. Fire Service informed that many firearms vehicles are engaged in trying to control the fire.

Photographs posted on social media, the most visited monument in Europe, the flames of the Gothic Church and the heavy clouds of smoke are visible above the roof of Europe.
Paris Mayor Anne Hidalgo said that the fire service is trying to control flames. At the same time, he appealed residents to respect the security cover around the building.

The cause of the fire could not be ascertained yet. After the fierce fire incident in Notre Dame, President Immanuel Macron canceled a program on Monday evening.
American President Donald Trump said in a tweet that seeing a fierce fire in Paris's Notre Dame Cathedral is so terrible. Perhaps the flyers of flying water tankers can be used to take it out. Should work quickly.