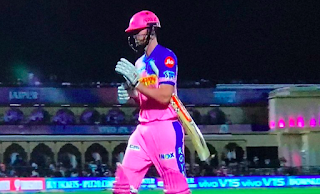 
Australian opener Ashton Turner, who came into the discussion after playing a daunting innings in Mohali ODI against India, could not even open an account in the Indian Premier League 2019. Australian batsmen have been victims of the Golden Duck (Zero on the first ball) for the third consecutive IPL match. On Monday, at the Sawai Mansingh Stadium in Jaipur, he was out on zero for the first ball against Delhi Capitals.

This was the fifth consecutive chance when he was out on zero in a T20 match. He is the first batsman to make this 'weird' record. Four times out of these, he is out on the first ball. This is a record that the batsman would not want to enter his name.
When the 26-year-old Turner landed on Monday, Rajasthan's score was 157 for three in 15.5 overs. The team's base was strong and Ajinkya Rahane was batting very well at the other end but Turner could not take advantage of it.

When did It  started

On 9 February, playing against Perth Scorchers in the Big Bash League, the first ball against Adelaide Striker was out on zero. After this, Australia were bowled out without opening the account in Visakhapatnam against India in the T20 International match. He played five balls in this match.
While talking about IPL, this is the third consecutive time when Turner is out on zero. The strange thing is that Turner was dismissed on the first ball three times. Against Kings XI Punjab in Mohali on April 16 in IPL, after that on 20th April, against the Mumbai Indians, they were dismissed for the first ball. He is the sixth batsman to be out on three occasions in the IPL. Ashok Dinda, Rahul Sharma, Gautam Gambhir, Pawan Negi and Shardul Thakur are also included in the unwanted list.
India's innings against India came in the discussion.Turner came to the discussion after playing an 84-run innings of 43 balls in India's ODI match against Mohali on March 10. In this match, the Australian team achieved the target of 359 with the help of their innings.