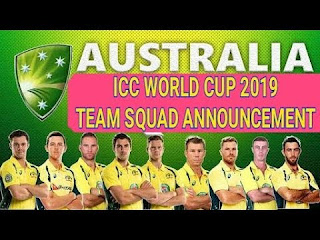 WC 2019: Australia made the announcement of the team, know who got the place, who got out

Where Warner and Smith have come back on one side. The names of some veterans are not included in this team. Josh Hejelwood and Peter Handscomb have not been able to find place in the World Cup team. Team top bowler Mitchell Starc is also back in the team, who were out due to his injury.

Warner and Smith, who suffered a ban due to a ball dispute during the Test against South Africa in Cape Town in March last year, have made a comeback in the team. Both were available for the first two ODIs against Pakistan, but the selectors advised them to return to play in the IPL. Both have done well in the IPL.

Australia's chief selector Trevor Houns said, "We are happy with the performance of the ODI team in the last six months. We won series from India and Pakistan. Steve Smith and David Warner have made a comeback in the team. Both are world class players and are playing well in the IPL. "

Chief selector Trevor Hans said, "Choosing a 15-member team has been a bit difficult because of the presence of the best players and the competition for each place."

Hosse said, "Unfortunately, Peter Handscomb, Ashton Turner and Ken Richardson, who have recently joined India and UAE tour team, have not got place in the World Cup, they included Smith, Warner and Starc in their place. All the three ex-players will be part of Australia-A team for the tour of England. "

Australia is the most successful team in the history of cricket. These five times world cup winners are always considered favorites in the World Cup. In 1999, 2003 and 2007, the champion turned out to be the world cup champion in the quarter-finals in 2011. After that, however, in 2015, they got their possession on the trophy. Earlier in 1987, Australia also won the World Cup.

This is the Aussie team for the World Cup: