Gautum gambhir Will file his nomination from East Delhi 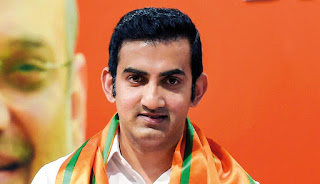 Gautam Gambhir will fight in Lok Shabha from Delhi


New Delhi: Gautam Gambhir, who has stepped in politics from the cricketing world, has recently retained the BJP, after which he is going to contest the Lok Sabha elections. The party has made him a candidate from East Delhi seat from where Mahesh Giri is the sitting MP from BJP. This time the party has given the ticket to Gambhir instead of Giri. BJP announced its decision to create East Cricket from East Delhi on Monday, in which names of many other candidates were announced. After the announcement of Gambhir's candidature from BJP, the former cricketer is now going to speed up the campaign in his parliamentary constituency. In this sequence, they are going to do road shows on today.

Gautam Gambhir will release road shows from Jagriti Enclave. He will file his nomination in Shastri Nagar DM office today. On this occasion, BJP's state president Manoj Tiwari will also be present, who is the sitting MP from North East Delhi and the party has once again given ticket to him, expressing confidence in him. Here the Congress has fielded former chief minister Sheila Dikshit, after which the fight is likely to be very interesting.

Union Minister Vijay Goel will also be present at the time of filing of the nomination of Gautam Gambhir. Since joining the BJP in the BJP, speculation was being made to contest Lok Sabha elections, which was stamped on Monday. Though the discussion was to bring him to New Delhi from the ground, but BJP retained the candidature of Nitvatan MP Meenakshi Lekhi from here, he brought Gambhir from the East Delhi constituency.