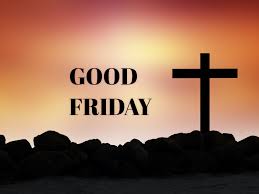 Its importance and significance

One of the most important festivals of the Christians is Good Friday. On this day the Christian Jesus Christ  was crucified. After three of these he had been alive, in which the Easter Sunday is celebrated. It is believed that the Lord Jesus sacrificed his life for the betterment and protection of humanity. This year, Good Friday is being celebrated on April 19 (Good Friday, April 19).

Despite being punished by Jesus, why is it called 'Good'?

According to Christianity, the jesus  is the son of God. They were given death penalty to remove the darkness of ignorance.

At that time the Orthodox rabbis (religious leaders) of Jews strongly opposed Jesus. In order to please the fanatics, Pilate ordered Jesus to be killed on the cross and kill him. But instead of ignoring his murderers, Jesus prayed for them, saying, 'O God! Forgive them because they do not know what they are doing.

On the day that Jesus Christ was hanged on the cross, that day  was Friday. Since then, that day was called Good Friday.

Good Friday and also the name

According to Christian texts, Jesus was hanged on a cross mark without error. They were tortured in many ways. This day was Friday, so it was named Good Friday. Good Friday is also called Holly Friday, Black Friday and Great Friday.

On the third day of Jesus Christ hanging on a cross on Friday, Jesus Christ was resurrected again. Because of this, it is called Easter Sunday. Easter egg in the Christian community means that eggs have special significance. The way the bird first gives the egg in its slit, after which the chicken emerges. The egg is considered auspicious in the same way. On Easter Sunday, people give each other an egg-shaped gift. Not only this, the egg size is also used in decoration.


How do you celebrate Good Friday and Easter Sunday?


Prayers and fasting begin in the homes of Christians already 40 days before Good Friday. In this fast, vegetarian food is eaten. On Good Friday, people go to church and remember Jesus and mourn. With this, on the day of Good Friday the special meaning of the last seven sentences of Jesus is focused on forgiveness, reconciliation, support and sacrifice.

At the same time, three days after death, Christians take part in the Lord's Supper and rejoice in the joy of the resurrection of Jesus Christ. Giving egg-shaped gifts to each other