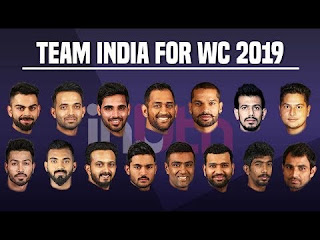 
Team India has been announced today for the World Cup starting in England and Wales from May 30. The BCCI's Senior Selection Committee has cleared this picture of the Indian team after the team selection in Mumbai today. In the Indian team, KL Rahul, Dinesh Karthik and Vijay Shankar have got an opportunity, while Ambati Rayudu could not find the place. Virat Kohli will take charge of the team, while the vice captain's responsibility is given to Rohit Sharma.

According to reports, names of 13 players in the 15-member squad for Team India's World Cup mission were already cleared and there was a special discussion about two places in the team. There was competition between Ambati Rayudu and allrounder Vijay Shankar at number 4, in which Shankar got the shot. Similarly, in the team as a reserve wicketkeeper, there was a tough fight between experienced Dinesh Karthik and Delhi's young player Rishabh Pant.

The selectors have trusted Dinesh Karthik here. Along with this, KL Rahul, who came in the form of a superb in the IPL, has also bettered his place in the team. The Indian team, which is entering the World Cup mission, will insist this time to win the third World Cup title. Earlier, Team India had won the title in the captaincy of Kapil Dev in 1983 and then captain Mahendra Singh Dhoni in 2011.

The list of indian cricket team matches are as follows :-