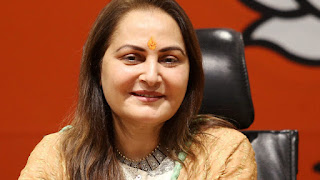 Jaya Prada, who has spoken on Azam Khan's obscene statement, will beat me and tell me what I am
BJP candidate Jaya Prada has strongly reversed her remark about Azam Khan's remarks against Samajwadi Party leader and candidate from BSP-SP coalition from Rampur. Jaya appealed to the Election Commission to cancel Ajam Khan's candidature for this statement. He challenged Azam directly and said that he will not leave Rampur for fear of Azam and will defeat him and tell him what is Jaya Prada. Jaya, who always tied Azmi with Rakhi, said, "Now he is not my brother."

Jaya said, 'This is not new to me. You will remember that I was a candidate from his party in 2009, even then he did such things for me, but no one has reported me. I'm a female. I can not speak from my tongue what he said.

Will you  be happy if I die?

Former MP of Rampur said, 'I do not know what I did for him that he is making such remarks. FIR against him has happened. The matter has come to the public. People will not leave it His election can be canceled. If this wins the election, what will happen to democracy? There will be no place for women in society. If I die, then you will be comforted. I will beat you and tell you what is Jaya Prada. Do not you have a mother and daughter in your house?

Amar Singh had my defense, so he removed '

In response to a question about Akhilesh Yadav's presence on Azam's platform, Jaya said, "I consider Akhilesh as my younger brother. But even when Azam Khan was attacking me, he did nothing. Amar Singh ji saved me because he was fired from the party.

What  did  Azam Khan said ?

Without Jaya Prada's name, Azam asked people present in a public meeting in Rampur on Sunday, 'Will politics fall so much that 10 years who drank the blood of Rampur, whom we took to the finger and brought us to Rampur, Do not blame. Will you vote for him? ' Azam further said that you took 17 years to understand the reality of your 10 years which represented you, I realized in 17 days that underwear is under khaki color.