Jet Airways flight will not fly from tonight, banks refuse to pay 400 crores 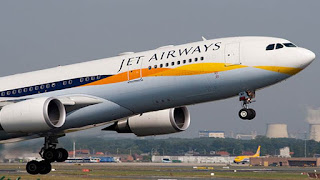 Jet Airways will ban their flight by tonight


Banks have refused to provide emergency loan assistance of Rs 400 crore to Jet Airways. News Agency  has told the sources that Jet Airways will temporarily suspend all its flights from Wednesday night. This decision has taken him on failing to raise the minimum interim fund of Rs 400 crore required for operation. There is a danger of shutting down on the airline due to non-payment of debt.
If the company closes, then the job of 20 thousand people will go away. The employees have performed similarly in Mumbai before, where the company is headquartered.

It is to be noted that the company, which had lost Rs 4,244 crore in the previous calendar year, has not paid salary to pilots, maintenance engineers and senior management officials from January. Other employees were being paid partial salaries, but they have not even received the salary of March.

The company has failed to pay the fare for the aircraft and the consortium of eight lending lenders has started the tender process to sell the stake of 75 percent of the airlines. Jet Airways, currently the country's second largest airline, has remained in less than 5 aircraft operations at this time. All of his international flights are canceled and he is capable of filling less than 35 domestic flights.

Fugitive liquor businessman Vijay Mallya has also tweeted today and sympathized with the sinking of Jet Airways. Vijay Mallya tweeted that although we were competitors, my sympathies with Rajesh and Geeta Goyal, who made Jet Airways, which India could feel proud of. Jet Alley has come up with better connectivity and class service.

He also wrote in the tweet that Jet and Kingfisher were big competitors but they were unhappy about the drowning of such a big airline. Vijay Mallya wrote in a tweet that if the government can save Air India by paying 35,000 crores of public There is such a big difference due to PSU. He has mentioned once more to return the money in a tweet.