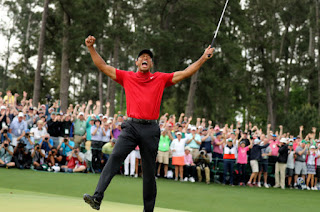 Tiger woods , the former 14 me major champion winner had again won the title after a long time and now he has won this for the 15th time by winning the Masters.In the age of 43 he came back and showed his potetial as a great player.

After the scandal that has triggered his divorce,many of the sponsors had dropped the woods who were paying him very huge amount in dollars earlier.Company like Accenture,AT & T and others.But the owner of the Nike stayed with him how much bad the situation was.

In these series  he had worked very hard and his hard work had let him won this title.
Woods has made an endorsement deal with an unlikely candidate bridgestone.Japanese company which is barely known in the U.S Golf world.He had signed the deal with them in the 2016 and played first in the tournamentthat he had sponsors once in a year.

By winning this title again for the 15th time he has shown the world his determination and courage that if any body wants to come back he can if he has the will for the same.

At  the age of 43 ,woods became the 2nd oldest person to win this title of the masters,after jack nickalus,46 in the year 1986.

President Trump had posted “ what a fantastic come back by a real great guy”.

Also former president Barack obama posted “ To come back after having so much highs and low in the life is a tastement of excellence and great determination.”

Woods said on a TV inetrview that,” Its unreal for me to experience this.”