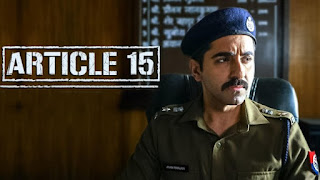 
What is the nature of a person? In a scene in Article 15, when a cop asks a contractor with a contractor, then he says that 'the authors of our work are the same, what we decide. There is no such thing in everyone. '
Speaking in common language, this aukt has actually been determined by the financial condition of any person, its status in society and its caste. Every community has its own problems, but even today, there is a big section in the society that, when climbing the mare, after filling the water from the high caste wells, sitting on the chair, biting the bones on the food or washing their hands with their own lives is  Article 15 speaks of the sub-section of the society at its lowest point.

AyanRanjan, who has spent a long time in Europe, loves his country just like the traditional NRI. He is proud to tell interesting stories of his country to his European friends, listen to Bob Dillon's songs and spend his life with a special pupil. Posting of Ayaan happens in a village, where two girls have been raped and they have been hanged from the tree. The police administration makes every effort to crack down on this case. This is a strong cultural shock for Ayaan. He sees a different truth in his country but he goes to the bottom of this case and in this whole journey he has to face many bitter truths.
AyushmanKhurana has been seen in many of the films till this movie, in which there has been talk about social issues between Laughter Thitholi but the level of Darkness in this movie is very intense and the movie's cinematography will show the same intensity in the curtain Has been successful.
The scary background music produces a hanging body hanging between the haze of winter; In the same scenario, people with experience of people entering the manhole without any protection want to realize that a part of society is still harassed due to our ignorance .
In some places, there is a lot of melodrama in the film, for example, Ayan wants to give justice to the girls and she does not get special problems with the system. While there are many such cases in the country when many honest officers have lost their lives due to their going against the system. It can be said that more horror than Bollywood movies is sometimes true.
Hero of the film is Manoj Pahwa. He has played the role of a policeman who loves animals, but it is full of cruelty for humans. In the last few days, Manoj is in the role of a strong policeman after the police characters of the Sacred Games. The same AyushmanKhurana and Kumud Mishra also have good acting. The dialogue between Ayushman and his girlfriends and the chemistry of Kumud-Manoj Pahwa is fantastic.
Sayani Gupta looks like a girl from the village with make-up and look, but urbanization is seen in the dialect and body language which is scarred. Background music proves to be an antidote in some places, although in some places it does not feel absolutely necessary. Mohammed ZeeshanAyub has done a good job in the role of a Dalit leader who is influenced by Dalit leader Chandrashekhar. Ayub'scharacter is not much bigger in the film, but after joining the activism world, such leaders break away from common life, have managed to show this suffering to Zeeshan.