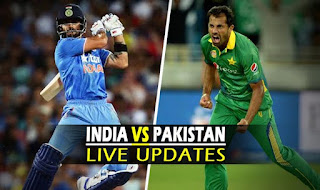 India beats Pakistan by 89 runs and repeated the history


Today the seasons greatest match was played between the India and Pakistan.The from India and pakistan had came all the way from both the countries to see the live match between the Two teams.
Pakistan has won the toss and elected to ball first.

Indian team started the match with the two openers Rohit sharma and KL Rahul who has replaced shikar dhawan and had opened the partenership with Rohit.

Rohit and KL rahul gave a good start to team India by making a good partnership of 136 runs.After that kholi had taken forward the partnership with Rohit.Rohit had played stupendous Innings by making his 2nd century in this world, Rohit had scored 140 runs in 113 balls.Kholi had scored 77 runs on 65 balls.KL rahul had scored 57 runs in 78 balls.Hardik panday had also contributed his 56 runs.

Virat kholi had became the world's fastest batsmen to score 11000 runs in the world history.He has made his 51th half century in international cricket.


With this India had made 336 runs in 50 overs after losing 5 wickets.

Pakistan start was not good they had lose their first wicket very earlier of Immul haq.The babar and Fahkar both had made a good parternership but were not succesfull their parternership was broken in kedar jhadav's spell.